This piece is part of our Native American inspired series.
The blade is shaped in an opaque obsidian, red and black, called Mahogany. So it comes from America and it fits perfectly with the idea I had of this prehistoric knife that could also come from America.
It is glued to the handle with prehistoric glue also used by North American Indians. Composed essentially of resin, this mass glue is then reinforced with a tendon ligature of deer coated with tendon glue.
The deer antler handle is engraved with an Amerindian sign. A small deerskin strap is attached to it.
The case, fringed, is made of rawhide covered with a traditionally tanned deerhide.
Anita brought her touch with some bone and jasper beads that discreetly decorate it.
I wanted to create an already lived aspect to this piece by applying the usual patina, while making sure that it remains light. The set thus gives the appearance of a case and its knife having already lived a few years worn by its owner. 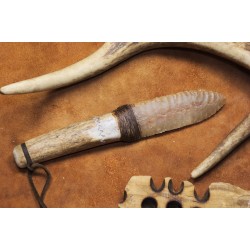 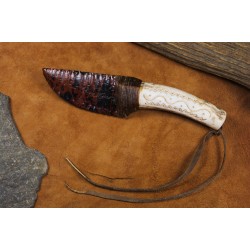 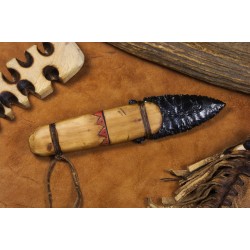